Explore Earth one billion years in the future in the science-fantasy setting of Numenera. Discover the Ninth World built on the bones of extinct, hyper-advanced civilizations and leave your own mark on it. Make thousands of essential choices, face the consequences, and meet death incarnated as you seek the answer to the ultimate question: What does one life matter?

Before the Ninth World was born, many great civilizations had risen and fallen, leaving behind remnants of their advanced technology. One man discovers a way to use these devices, known as the numenera, to jump between bodies and thus cheat death. Yet his method awakens a ancient and deadly force called The Sorrow, which tries to kill the death-cheater and all his former bodies: including you. 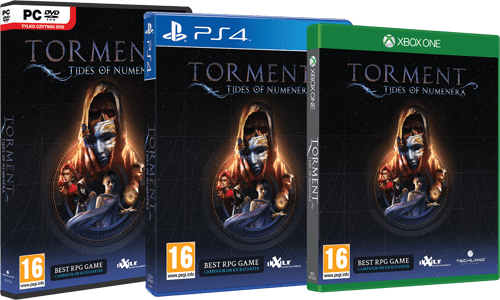 The Ninth World is Earth, one billion years in the future. Many great and powerful civilizations have arisen and disappeared in that time, not all of them human. The powers of these civilizations beggar description. Among them were civilizations that mastered space and time, people who could halt the death of the sun or shape the continents as they wished, or beings who could shape life itself to suit their needs and whims. Their abilities are far beyond ours; even if our civilization were to survive another 10,000 years, we would barely have begun to accumulate the strength and knowledge that could place us in the histories of what Ninth Worlders call the “prior worlds”.

The prior worlds are gone now; they died out, transcended, or otherwise moved on. The present world is called the Ninth World, not because there were eight worlds before it, but just because that is what they have called themselves. The Ninth World is exceedingly young—not even 1,000 years in recorded history.

There are no records of the prior worlds, who they were, or what happened to them. All that remains is the detritus they left behind in vast profusion: crumbling ruins, floating monoliths, the descendants of their engineered or imported creatures. Abandoned clouds of nanites wander the scrublands, horrifically twisting whatever they come across according to some warped, unknowable design. Automaton soldiers march across desolated fields, fighting a war that no one remembers or could even understand. The Earth itself is surrounded by the datasphere: an invisible network that constantly transmits information across the globe to some unknown purpose, but that the very clever (or very lucky) can sometimes tap into for their own purposes.

The people of the Ninth World call all these things, collectively, the numenera. Some Ninth Worlders scavenge the ruins of the prior worlds, seeking ancient artifacts and relics to sell or use. Others harness power from invisible energies left in the very air and soil. The numenera are equally a source of aid and horror, ineffable and inexplicable.

Numenera explorers are defined with a descriptor, a class (called a type), and a focus. For instance: I'm a strong-willed jack who exists out of phase. You could also say it like this: I'm a <descriptor> <type> who <focus>.Let's break that down.

The types are the three character classes: the glaive, the nano, and the jack. The glaive is a warrior, improving himself through intense physical training and the application of the numenera to his body and mind. The nano studies the secrets of the lost ages, hoping to harness a fraction of the power of the relics she finds, and channeling inherent abilities to devastating effect. The jack blends the two, mastering no trades but understanding them all, making use of the abundant numenera to her own benefit.

Descriptors are adjectives like tough, intelligent, and cautious. Your descriptor helps paint what kind of person you are and modifies some of your abilities.

But your focus is where things get most interesting. Your focus is the gift (and the curse) that you have inherited or created, one defined through your relationship with the numenera and your years of training. Your focus helps you manifest your powers to their full extent. You might ride the lightning, electricity dancing at your command. You might master weaponry to become one of the most fearsome warriors of the Ninth World, or even summon uncanny forces to do your bidding. There are many more options, and the choice of which is yours.

Certain scholars of the Ninth World have studied the pull of forces they call The Tides; unseen powers that have profound and lasting effects for those attuned to their motions. Like gravity or magnetism, the Tides are invisible, powerful, and, with the right tools, perhaps even controllable. Those who manipulate them can have a strong influence on society, the numenera, and the mysterious creatures of the world. Does everyone know of the Tides? Not at all. In fact, knowledge of the Tides is generally limited to a select few.

The understanding of these forces is incomplete and difficult to grasp; the Tides represent concepts that are not entirely definable by language. Those who acknowledge them have given them symbolic colors based on how they appear to correspond with emotional and psychological reactions. The colors are important because a word like justice (for example) is too simplistic. The Indigo Tide represents justice and fairness, but it might also mean a desire for the greater good or an end justifies the means mentality. The Gold Tide can represent false philanthropy as well as martyrdom. It's the actions that matter, not the motivations.

In the game, the Tides serve as a kind of alignment system; but a more nuanced system, and one that does not judge actions based on whether they're good or evil. You'll learn more about the Tides as you explore Torment. And the Tides will gradually change based on your actions and decisions, ultimately determining your Legacy.

The Tides themselves are explored further in the novella compilation, From the Depths.

Set in a far, far distant future, the Numenera RPG puts a new spin on traditional fantasy, creating something unique to reinvigorate the imagination of gamers everywhere. Player characters explore a world of mystery and danger to find leftover artifacts of the past: bits of nanotechnology, the datasphere threaded among still-orbiting satellites, bio-engineered creatures, and myriad strange and wondrous devices that defy understanding. Numenera is about discovering the wonders of the worlds that came before, not for their own sake, but as the means to improve the present and build a future.

With streamlined, intuitive rules, Numenera allows players to create characters in minutes, emphasizes imagination and narrative, and features an elegant, flexible, and powerful rules set. Numenera is the latest creation of one of the biggest names in roleplaying games, award-winning designer and fan-favorite Monte Cook.